Hisham Rifai is a self-taught visual artist working in political, subversive, and pedagogical artforms. Raised in a small, conservative town in the North of Lebanon, Hisham moved to Beirut in 2018 where he explored the potentials of art as a mode of social/political expression.

Hisham's involvement in the Oct 17 uprisings of 2019, and his engagement and observations of political movements and activities, crystallized his view of art. Political, economic, and security crises became a major factor in his life and the lives of the people around him, which led him to understand the urgent need for art as a means to create an educational environment hostile to the ruling, sectarian, patriarchal oligarchy.

His research looks into the links, and sometimes the lack of links, between artistic practices and political urgency. His interest mostly lies in the search for politically-informed cultural practices (which is an expanded perspective of art that encompasses pedagogy, forms of dissemination, etc.) and how they can best fulfill their political potential. Here Hisham examined issues of audience and forms of outreach: who is art for and how best can it reach them? Whether talking about poor communities or non-urban communities, he discovered through his research that one of the most important, and often neglected, things regarding politically-informed cultural practices is accessibility, both in terms of form and dialogue.

In Hisham’s own artistic practice, he has been leaning towards comics as an artistic form of pedagogy, a culturally accessible medium that is easily laden with political, historical, economic knowledge. All these things have been explorations of potential tools that can be used to reach out to people and open up new, urgently needed discussions around the urgent political matters facing us today (whether about mutual aid in Lebanon or direct action vis a vie climate change).

Hisham’s research began with contemplations on the gap between political artistic methods and the people. The initial research question was: How can I explain revolutionary/heterodox ideas to my mother? How can art help further those discussions and spread the ideas that need to be spread?

This led to the interrogation of the ostensibly mutually exclusive terms “artist” and “activist”. For Hisham these two terms are not very separate: they stem from the same impulse to serve his community.

Hisham’s current projects include a political, pedagogical comic series ‘Revolution in Every Country’, which is a short anthology of contemporary, revolutionary movements, ideas, and people in the SWANA region.

Earlier this year he published his first graphic novel, A Letter Home, created with his artistic collaborator Ayman Makarem.

Hisham is also developing his first animated short film, The Corpse, which explores the incomprehensibility of trauma.

His work is published on the instagram page Bizri #6, the name given to his collaboration with Ayman. 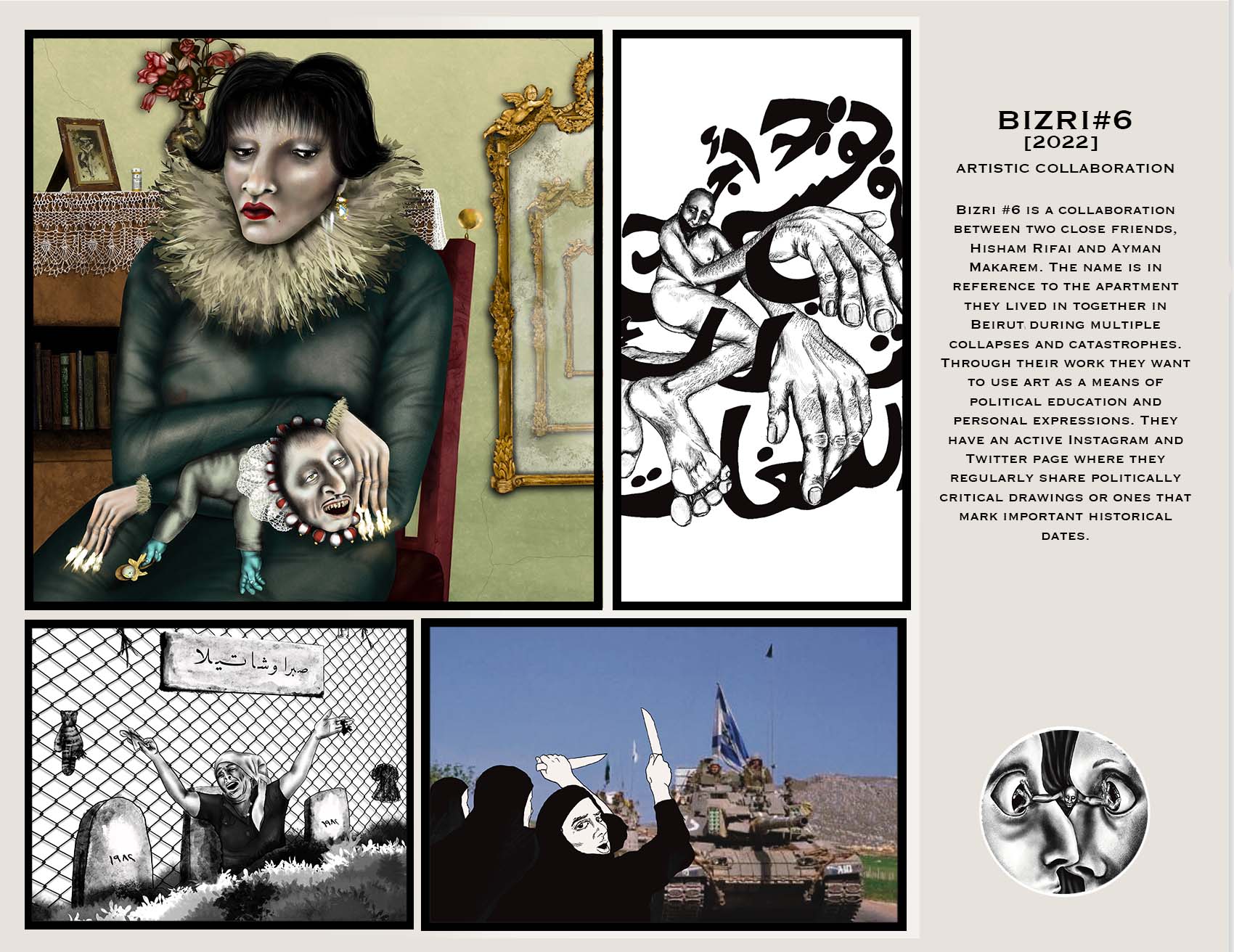 Hisham is a self-taught visual artist working in areas of political, subversive, and pedagogicalartforms. Through his practice, he hopes to highlight the contradictions within the hegemonicreligious, social, and political systems mainly in the SWANA region