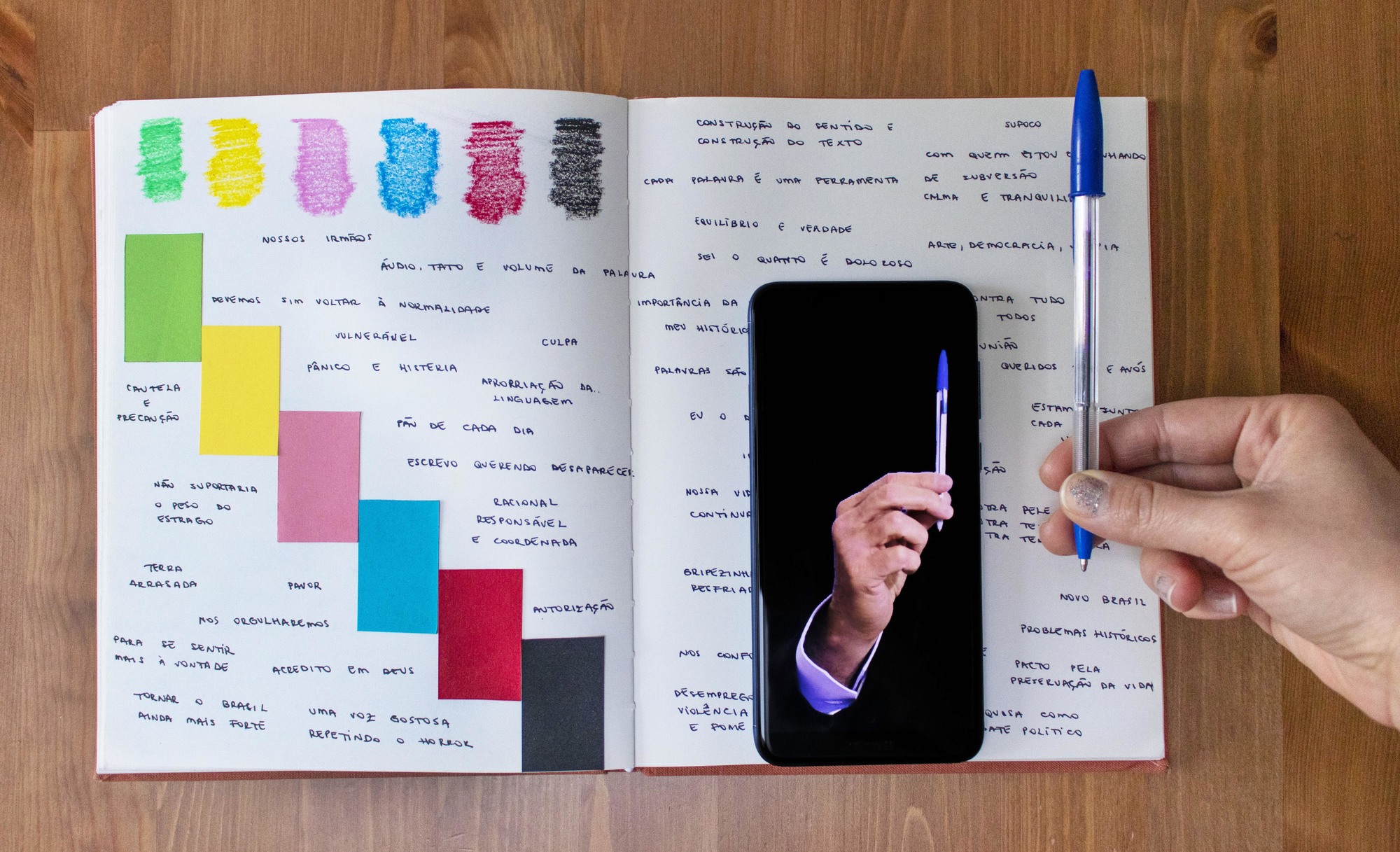 The research I developed at AdMa started from my interest in the power of language. I am especially interested in the ways in which oral and written language can be manipulated and can be used as a tool of social transformation by those who are in positions of power. Within this context, I chose to work with the case of Jair Bolsonaro and his connection with the rise of the extreme right in Brazil. Bolsonaro's speeches demonstrate much more than details of the personality of someone who does not know how to communicate as a head of state. His speeches are directed to his core of supporters and are part of the construction of a conservative model that wants to rule an inherently diverse country by means of exclusion.

The power of language is reaffirmed when the results of what a public person declares can be seen in society. Being openly homophobic, misogynistic, racist and against indigenous peoples, Bolsonaro’s statements led to increasing cases of violence and discrimination against these groups. His statements about global warming and his negligence about environmental issues stimulate the devastation of the Amazon Forest by illegal loggers and miners. More recently his irresponsible reaction to the coronacrisis, by underestimating the pandemic, has set Brazil as a global hotspot and second in the world with more number of confirmed cases. A word is never just a word, or according to philosopher Vladimir Safatle: words are the most real thing, as their circulation authorizes actions, violence, affections and tombs.

Considering language as a living system that is in constant change, I wonder: how to develop methods and tools that facilitate the transformation of extremist discourses into material for an artistic process? How can we change the kind of energy engaged in such speeches and channel it into something that can be kinder, more creative, softer than hate? How to explore the flexibility of language to transform and restore affections? And finally, is it possible to create poetry, joy, beauty and pleasure from words that were previously used to attack, confine and exclude?

Triggered by these questions and by the urgent need to respond in any way to what is happening in my home country, I started acting on Bolsonaro's words. As a method for my research I transcribe official speeches available online on platforms such as YouTube, Twitter and Facebook. With this material in hand, I isolate key sentences and start a process of approximation between myself and each word. By making objects, images, texts and sound pieces, I claim ownership of those words in a process of transformation that opens up new meanings, references and possibilities when isolating them from their original context. Ultimately, by transforming his words in mine (via my artistic practice), I disempower his rhetoric and place what Bolsonaro represents in situations of discomfort, irony, laughter and, why not, of care. 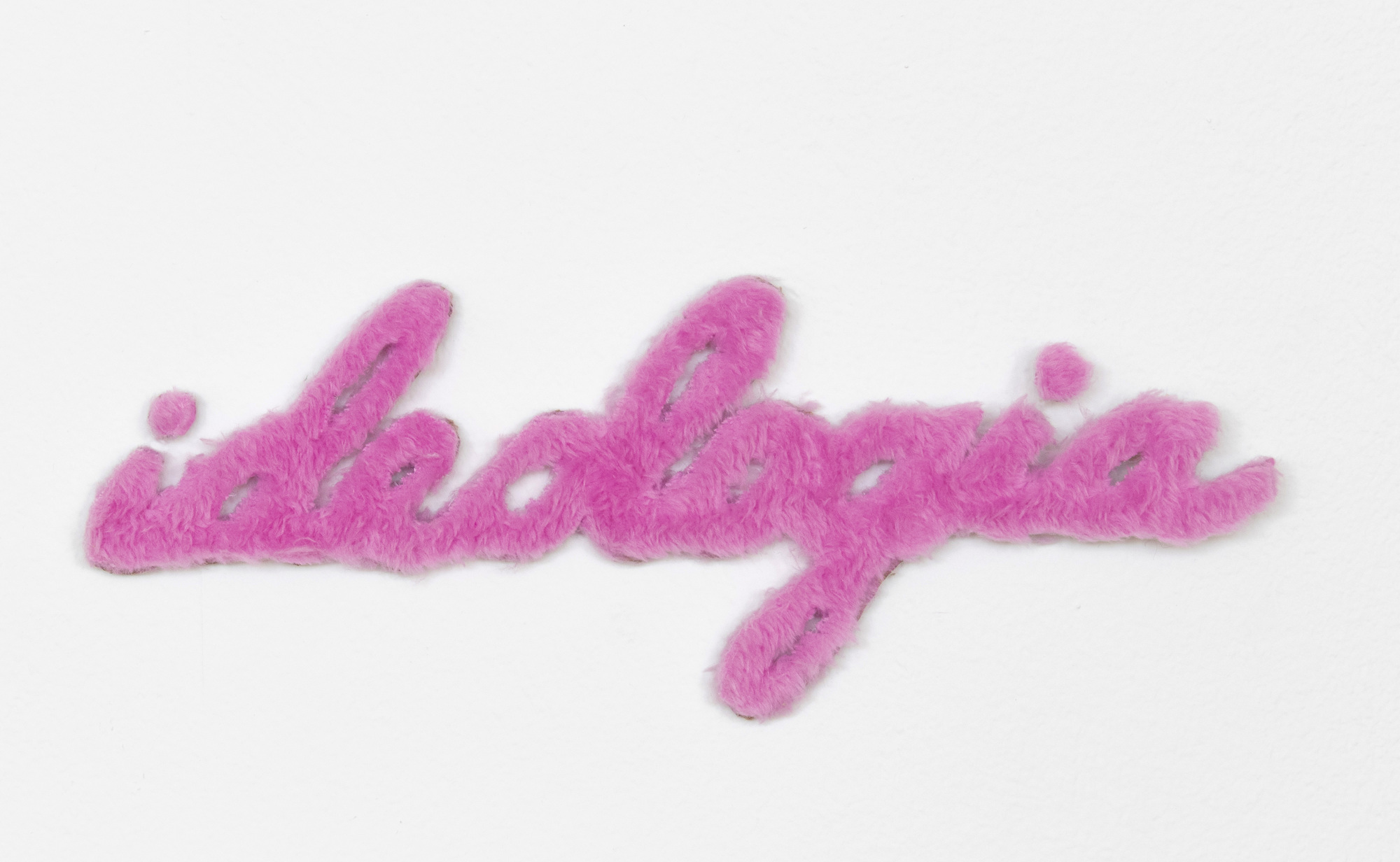 This piece was made after I transcribed Bolsonaro's inaugural speech. The word ideologia (ideology) and its variants were repeated 5 times in a speech of a bit more than 8 minutes. Each time he mentioned it, Bolsonaro added different adjectives to increase the perverted connotation he wanted to attribute to ideologia. By using the soft - however artificial - pink fur, I wanted to force a contrast with the harshness of Bolsonaro's tone and question: is all ideology a perverse or nefarious one, as he mentions? Would there be room for soft ideologies, kitsch ideologies (hence the choice for pink colour), soft ideologies, utopian ideologies, that dream more of union than exclusion?

For this video, I imagined what it would look like if Bolsonaro’s words were part of a song, and if in that song he would collaborate with people who are actually opposed to his government. After a few attempts I arrived to funk music - rhythm and culture born in the Brazilian peripheries. Funk came in contrast to the ultra-conservative style that Bolsonaro and his allies want to impose via their political actions, subduing any kind of culture, even less a peripheral one. The video works as a space of impossibilities, where words, reactions and sounds are forced to be rhythmically together. With special thanks to Achiel Buyse and Kauê Werner for their help and support.

I invited Brazilian artist Traplev for an online conversation to get to know more about his practice and to present my research. I knew his work for many years and I believe that our practices share several common interests, such as language, politics, mass media and the Brazilian context. It was inspiring to exchange thoughts at that very moment specifically, as March marked the beginning of quarantine both in Brazil and in Belgium. It was also much needed for my research to be in close contact with artists who are based in Brazil.

The desire to compose this playlist arose from the feelings around the way in which artists can react to social injustices through their work and how music has the strength to become a collective tool of resistance. At first, the idea was to build a dance floor for AdMa's final show, but due to corona all the activities were transferred into the online sphere. Nevertheless, the present selection in this playlist can be enjoyed from home and the power inherent to each composition overpasses language differences. I believe that music is a channel of communion, of celebration and of resistance, and based on this conviction I invited Alfaiataria and DJ Jada to contribute to the playlist. Their work in the cultural sector and music scene is an inspiration of resilience, and their actions reflect the importance of art, specifically at this moment in Brazil. Their selection for this collaboration echo the diversity of genres through different periods of Brazilian music, which has continuously been a source of energy and power to stand against all forms of authoritarianism.

Alfaiataria is a space for interdisciplinary research and artistic practices located in Curitiba, Brazil. Here they promote and realize various activities, such as the creation and presentation of theatre pieces, dance, music, saraus, video screenings, performances, exhibitions and conversations. In addition to their own program, designed and organized by artists Janaina Matter, Luana Navarro and Guilherme Jaccon, Alfaiataria also hosts projects and actions proposed by artists from other contexts. At Alfaiataria you can find Estopim, a library/collection that arises from the desire to share books and independent publications in a common space.

Born in Bahia, in the Liberdade neighbourhood, DJ Jada is based in Rio de Janeiro, where he has been a DJ for over 10 years. Producer and DJ of the label/webradio SoundCasa, Jada persists on spreading good music and joy, even in pandemic times.

Anne Marie Sampaio (1989, BR) currently explores the power and flexibility of language in the Brazilian social-political context, with a focus on the oral and written manifestations of president Jair Bolsonaro. Her research, as much of her previous works, counts on different mediums to be shared, such as site-specific and ephemeral actions, text, objects, video and more recently sound and music experiments. These are always related to Anne Marie's interest in relations of power and their political structures (in societies, public spaces, languages, gender). Anne Marie holds a bachelor’s degree in Visual Arts (UFPR, BR) with specialization in Modern and Contemporary Art History (EMBAP, BR) and a Master of Fine Arts (KASK, BE). After years based in Brussels, Anne Marie is now moving to Amsterdam.